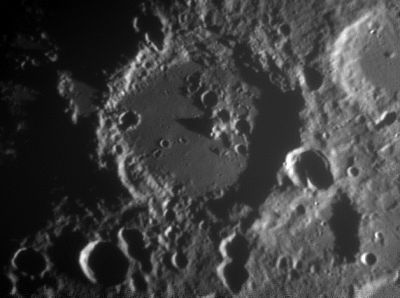 (IAU Directions) WALTER.--A great rhomboidal walled-plain, 100 miles in diameter, with a considerably depressed floor, enclosed by a rampart of a very complex kind, crowned by numerous peaks, one of which, on the E., rises 10,000 feet above the interior. If the formation is observed when it is close to the morning terminator, say, when the latter lies from l deg. to 2 deg. W. of the centre of the floor, it is one of the most striking and beautiful objects which the lunar observer can scrutinize. The inner slope of the border which abuts on Regiomontanus, examined at this phase under a high power, is seen to be pitted with an inconceivable number of minute craters; and the summit ridge, and the region towards Werner, scalloped in a very extraordinary way, the engrailing (to use an heraldic term) being due to the presence of a row of big depressions. The floor at this phase is sufficiently illuminated to disclose some of its most noteworthy features. Taking its area to be about 8,000 square miles, at least 1,200 square miles of it is occupied by the central mountain group and its adjuncts, the highest peak rising to a height of nearly 5,000 feet (or nearly 600 feet higher than Ben Nevis), above the interior, and throwing a fine spire of shadow thereon. In the midst of this central boss are two deep craters, one being about 10 miles in diameter, and a number of shallower depressions. In association with the loftiest peak, I noted at 8 h., March 9, 1889, two brilliant little craters, which presumably are not far from the summit. Near the W. corner of the floor there is another large deep crater, and, ranging in a line from the centre to the S.W. wall, three smaller craters.

Like Getting New Glasses
The Dawn of Walther
Whitewashed! (dark spot Walther A)