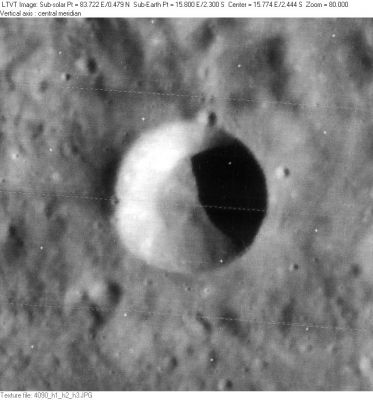 LPOD Photo Gallery Lunar Orbiter Images Apollo Images
Theon Junior "behind" nearby Delambre, as seen by Apollo 10: AS10-32-4733 (looking west-southwest).
Theon Junior was also photographed during the mission of Apollo 16 in april 1972. It was captured near the rightmost margins of ITEK-camera frames AS16-P-5324, AS16-P-5326, and AS16-P-5331.
Additional research orbital Apollo 10 and Apollo 16 photography: Danny Caes

(IAU Directions) THEON JUNIOR.--A ring-plain similar in size and in other respects to Theon Senior, situated about 23 miles S. of it on a somewhat dusky surface. Between the pair is a curious oblong-shaped mountain mass; and on the W. a long cliff (of no great altitude, but falling steeply on the W. side) extending S. towards Taylor a. Just below the escarpment, I find a brilliant little pair of craterlets, of which Neison only shows one.

Theon of Alexandria (ca. 335 - ca. 405 AD) was a Greek scholar in Alexandria, Egypt, and the last director of the Library of Alexandria before it was burnt and destroyed by Christian riots. Theon's most durable achievement may be his edition of Euclid's Elements, published around 364 and authoritative into the 19th century. The bulk of Theon's work, however, consisted of commentaries on important works by his Hellenistic predecessors.