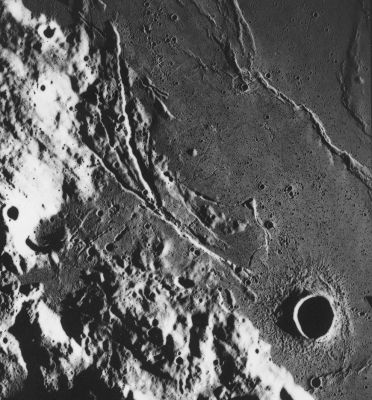 Apollo 17 image AS17-M-0809 Sulpicius Gallus is the shadowed crater at lower right. The forked system of rilles extending to the northwest is Rimae Sulpicius Gallus. The highland areas, especially at lower left, are part of Montes Haemus. The sharp ridge cutting diagonally across the image in the upper right is Dorsum Buckland. The broader vertical ridge to its upper right (paralleling the image margin) may be part of Dorsum Von Cotta.


Sunrise at the curious vent immediately west of Sulpicius Gallus, as photographed by the Fairchild camera aboard the SIM-bay of Apollo 17's CSM America

(IAU Directions) SULPICIUS GALLUS.--Another brilliant object on the south edge of the Mare Serenitatis, some distance W. of Menelaus. It is a deep circular crater about 8 miles in diameter, rising to a considerable height above the surface. Its shadow under a low morning sun is prominently jagged. On the W. are two bright mounds, and S. of that which is nearer the border of the Mare, commences a cleft which, following the curvature of the coast- line, terminates at a point in E. long. 9 deg. This object varies considerably in width and depth. Another shorter and coarser cleft runs S. of this across an irregularly shaped bay or inflexion in the border of the Mare.

Sulpicius Gallus is (or was?) number two in the list of 12 localities in the Lunar Ellipse of Fire (see article from Farouk El-Baz in Sky and Telescope - June 1973).