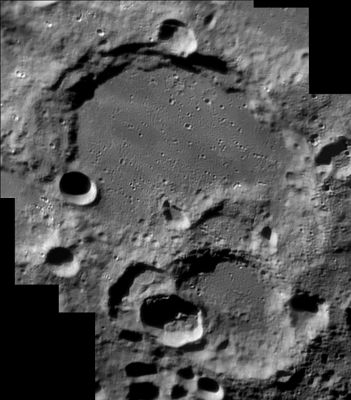 (IAU Directions) STOFLER.--A grand object, very similar in size and general character to Maurolycus, its neighbour on the E. To view it and its surroundings at the most striking phase, it should be observed when the morning terminator lies a little W. of the E. wall. At this time the jagged, clean-cut, shadows of the peaks on Faraday and the E. border, the fine terraces, depressions, and other features on the illuminated section of the gigantic rampart, and the smooth bluish-grey floor, combine to make a most beautiful telescopic picture. At a peak on the N.W., the wall attains a height of nearly 12,000 feet, but sinks to a little more than a third of this height on the W. It is apparently loftiest on the N. The most conspicuous of the many craters upon it is the bright deep circular depression W. on the S. wall, and another, rather larger and less regular, on the N.E., which has a very low rim on the side facing the floor, and a craterlet on either side of the apparent gap. A large lozenge-shaped enclosure abuts on the wall, near the crater W., with a border crowned by a number of little peaks, which at an early stage of sunrise resemble a chaplet of pearls. The floor of Stofler is apparently very level, and in colour recalls the beautiful steel-grey tone of Plato seen under certain conditions. I have noted several distinct little craters on its surface, mostly on the N.W. side; and on the W. side a triangular dark patch, close to the foot of the wall, very similar in size and appearance to those within Alphonsus.