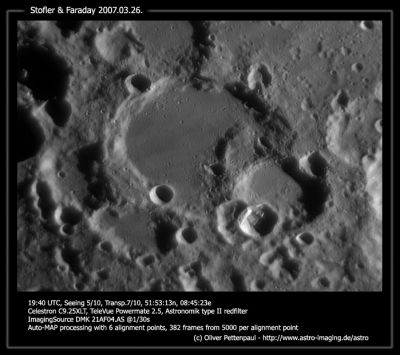 Oliver Pettenpaul
Faraday is the smaller crater that overlaps Stöfler.

(IAU Directions) FARADAY.--A large ring-plain, about 35 miles in diameter, overlapping the S.E. border of Stöfler; its own rampart being overlapped in its turn by two smaller ring-plains on the S.W., and by two still smaller formations (one of which is square-shaped) on the N.E. The wall is broad and very massive on the W. and N.W., prominently terraced, and includes many brilliant little craters. Schmidt shows a ridge and several craters in the interior.