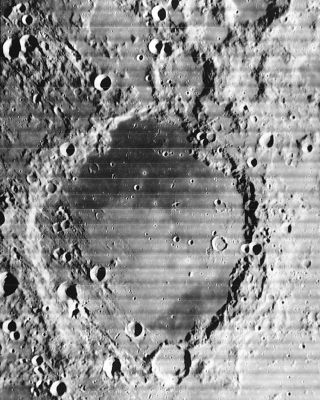 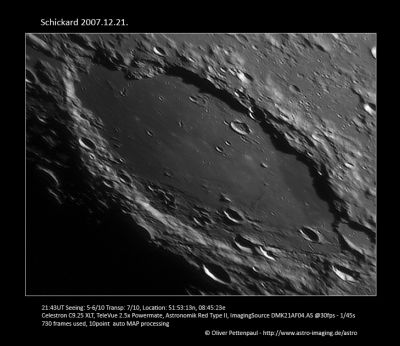 Left: LO-IV 160 H2 Just outside Schickard's north rim is the 53-km crater Lehmann. The south rim is broken by 32-km Schickard E. Many other lettered craters named after Schickard and its neighbors are also visible in this overhead view. Right: Oliver Pettenpaul An Earth-based view.

(IAU Directions) SCHICKARD.--One of the largest wall-surrounded plains on the visible surface of the moon, extending about 134 miles from N. to S., and about the same from W. to E., enclosing a nearly level area, abounding in detail. Its border, to a great extent linear, is very irregular, and much broken by the interposition of small ring-plains and craters, and on the N. by cross-valleys. Its general height is about 4,000 feet, the loftiest peak on the E. wall rising to more than 9,000 feet above the floor. The inner slopes of this vast rampart are very complex, especially on the W., where many terraces and depressions may be seen under suitable illumination. There are three large ring-plains in the interior, all of them S. of the centre; and at least five smaller ones near the inner foot of the W. wall, which can only be well observed when libration is favourable. The two more westerly of the large ring-plains are connected by a cleft, and there are several short clefts and crater-rows associated with the smaller ring-plains. On the N. side of the area is a number of minute craters. The floor is diversified by two large dark markings--an oblong patch on the S.E. side, abutting on the wall, being the more remarkable; and a dusky area, occupying a great portion of the N. part of the floor, and extending up to the N. border. This is traversed by a light streak running from N. to S., which is the site of a row of minute craters.