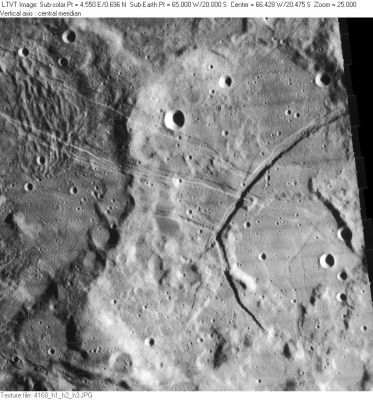 LO-IV-168H The discontinued name Rima Byrgius referred to the deeply shadowed arc-shaped rille running vertically through the unnamed 130-km diameter enclosure to the right of center. The large crater partially visible on the left is Darwin (Byrgius is just out of the field to the lower right). The rilles that run horizontally across Darwin and the unnamed enclosure are part of Rimae Darwin. Just out of the field in the upper right is the crater De Vico A which the rille passes through. A wider angle view would show that Rima Byrgius is a natural and continuous extension of Rimae Sirsalis; which, in the original IAU nomenclature terminated at De Vico A.

(IAU Directions) SIRSALIS.-- ... One of the longest clefts on the visible surface runs immediately E. of this formation. Commencing at a minute crater on the N. of it, it grazes the foot of the E. glacis; then, passing a pair of small overlapping craters (resembling Sirsalis and its companion in miniature), it runs through a very rugged country to a ring-plain W. of De Vico (De Vico a), which it traverses, and, still following a southerly course, extends towards Byrgius, in the neighbourhood of which it is apparently lost at a ridge, though Schmidt and Gaudibert have traced it still farther in the same direction.