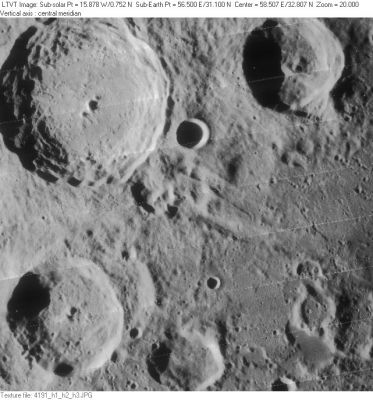 LO-IV-191H The large crater in the upper left is Geminus. To its right is Bernoulli, and in the lower left is Burckhardt. Rima Burckhardt I, one of three rilles associated with Burckhardt in the original IAU Nomenclature runs across the frame from the unnamed crater on the southeast edge of Geminus to just north of the unnamed crater with the raised edge near the right margin. To the north of Rima Burckhardt I, there is a transition from smooth low terrain to a rougher highland (most obvious just south of Bernoulli). This is regarded as on the "Geminus ring" of the Crisium Basin, which is to the south.

(IAU Directions) GEMINUS.-- ... Two fine clefts are easily visible within the ring, one running for some distance on the S.W. side of the floor, mounting the inner slope of the S.E. border to the summit ridge (where it is apparently interrupted), and then striking across the plain in a S.E. direction. Here it is accompanied for a short distance by a somewhat coarser companion, running parallel to it on the N.