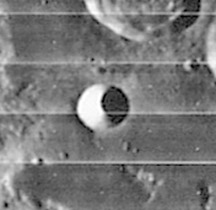 Left: LO-IV-085-H1 The crater along the top margin is Ritter, with a small piece of Sabine visible to its lower right. Right: Apollo 10 AS10-31-4629 Schmidt viewed obliquely from the northeast, with Sabine in the foreground.

(IAU Directions) SCHMIDT.--A bright crater at the foot of the S. slope of Ritter.