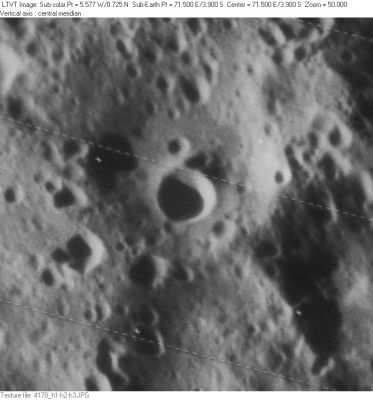 LPOD Photo Gallery Lunar Orbiter Images Apollo Images
- Because Rankine's location is at the floor of satellite crater Maclaurin B, all orbital Apollo photographs of it should be in the list of that crater (Maclaurin B).- DannyCaes Aug 22, 2010
- Apollo 16's panoramic ITEK-camera frame AS16-P-4394 shows Rankine's bright cone-shaped inner slopes a little bit beyond (to the right of) the frame's centre (rightward of the sun's bright retro-reflection at centre of the frame).
- Additional research: Danny Caes