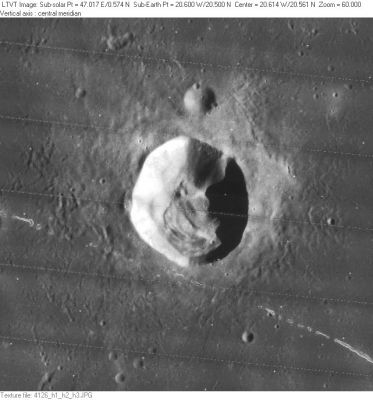 LO-IV-126H The 5-km diameter crater above Pytheas is Pytheas D.

(IAU Directions) PYTHEAS.--A small rhomboidal-shaped ring-plain, 12 miles in diameter, standing in an isolated position on the Mare Imbrium between Lambert and Gay-Lussac. Its bright walls, rising about 2,500 feet above the Mare, are much terraced within, especially on the W. There is a bright little crater on the N. outer slope, with a short serpentine ridge running up to it from the region S. of Lambert, and another winding ridge extending from the S. wall to the W. of two conspicuous craters, standing about midway between Pytheas and Gay-Lussac. The former bears a great resemblance to the ridge N. of Madler, and, like this, appears to traverse the N. border. The interior of Pytheas, which is depressed more than 2,000 feet below the Mare, includes a brilliant central peak.