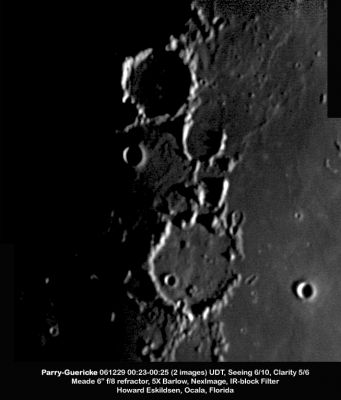 (IAU Directions) PARRY.--A more complete formation than Guerike. It is about 25 miles in diameter, and is encompassed by a bright border, which, at a point on the W., is nearly 5,000 feet in height. It is intersected on the N. by passes communicating with the interior of Fra Mauro. There is a crater, nearly central, on the dusky interior, which, under a low sun, when the shadows of the serrated crest of the E. wall reach about half-way across the floor, appears to be the centre of three or four concentric ridges, which at this phase are traceable on the W. side of it. There is a conspicuous crater on the W. wall, below which originates a distinct cleft. This object skirts the inner foot of the W. border, and after traversing the N. wall, strikes across the wide expanse of Fra Mauro, and is ultimately lost in the region N. of this formation. Parry A, S. of Parry, is a very deep brilliant crater with a central hill and surrounded by a glistening halo. A cleft, originating at a mountain arm connected with the W. side of Guerike, runs to the S. flank of this object, and is probably connected with that which skirts the floor of Parry on the W.