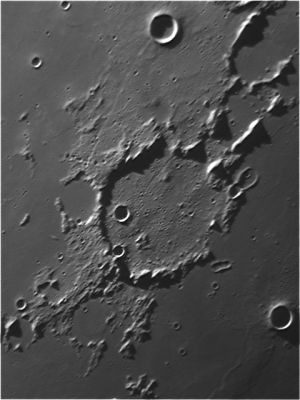 (IAU Directions) GUERIKE.--The most southerly member of a remarkable group of partially destroyed walled-plains, standing in an isolated position in the Mare Nubium. Its border, on the E. and N. especially, is much broken, and never rises much more than 2,000 feet above the Mare, except at one place on the N., where there is a mountain about 1,000 feet higher. The W. wall is tolerably continuous, but is of a very abnormal shape. On the S. there is a peculiar LAMBDA-shaped gap (with a bright crater, and another less prominent on the W. side of it), the narrowest part of which opens into a long wide winding valley, bounded by low hills, extending to the E. side of a bright ring-plain, Guerike B, on the S.W. A crater-chain occupies the centre of this valley. There is much detail within Guerike. A large deep bright crater stands under the W. border on a mound, which, gradually narrowing in width, extends to the N. wall; and a rill-like valley runs from the N. border towards the W. side of the LAMBDA-shaped gap. In addition to these features, there is a shallow rimmed crater, about midway between the extremities of the rill-valley, and several minor elevations on the floor.

On the broken N. flank of Guerike is a number of incomplete little rings, all open to the N.; and W. of these commences a linear group of lofty isolated mountain masses extending towards the E. side of Parry, and prolonged for 30 miles or more towards the north. They are arranged in parallel rows, and remind one of a Druidical avenue of gigantic monoliths viewed from above. They terminate on the S. side of a large bright incomplete ring (with a lofty E. wall), connected with the E. side of Parry.

Hundreds, or thousands, of boulder tracks

LPOD is back again