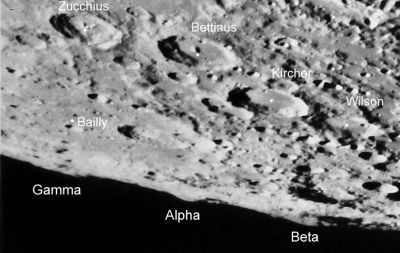 Johann Schröter, "discoverer" of the Doerfel Mountains, was a meticulous observer who left careful records of his observations, including the date and time at which they were made, and such things as a record of the observed librations by means of noting how far Plato and Grimaldi were offset from the limb. The date and time makes it easy to reconstruct what he must have seen based on data on the shape of the Moon's surface returned by instruments on the Kaguya and LRO spacecraft (as added proof, see this simulation of the expected appearance of the limb at the time of the Consolidated Lunar Atlas photo reproduced above).

In the case of the Doerfel peaks, Schröter's initial observation was on October 15, 1788 at about 18:00 UT, at which time he saw three relatively prominent peaks along the Moon's limb. He called these Doerfel Alpha (central peak), Beta (to east of Alpha) and Gamma (to west of Alpha), noting that a straight line from Tycho through Kircher crossed the limb at Doerfel Alpha. He also carefully recorded the width and spacing of the peaks (as well as their heights), and noted a possible fourth peak to the west of of Gamma. This careful description unambiguously identifies the peaks as shown in the first simulation, below.

Schröter next looked for the peaks on November 15, 1788 and again on January 12, 1789, but saw only a single peak at those times, which is consistent with the above identifications. On August 12, 1789, when the libration was very similar to his initial view, he made a daytime observation of the limb and again noted the four peaks as shown in the middle simulation. This is "unrolled" to an aerial view in the final image, where the locations of the features producing the labeled peaks in the first two simulations is indicated relative to modern IAU-named features (represented by a gray-scale version of the topographic heights, white being high, and black low). The blue line is the theoretical limb, with most of the area above the line visible from Earth.

Note: the preceding was based entirely on a reading, by a person with little knowledge of German, of the verbal description in the on-line scan of Volume 1 of Schröter's book. The words refer to plate T. IV, in which Schröter illustrated these and other observations. Reproductions of that plate do not appear to be available on-line, however a scan of T. IV has recently been made available by Nigel Longshaw, and it confirms that the Fig. 5 drawing, and its lettering, match the October 15, 1788 simulation (although rotated, and the "delta" peak is not shown in the simulation). Plate TL (part of Volume 2) appears to show the Sun rising over the limb peaks near Bailly, but the text that accompanies it is not currently available on-line.- JimMosher