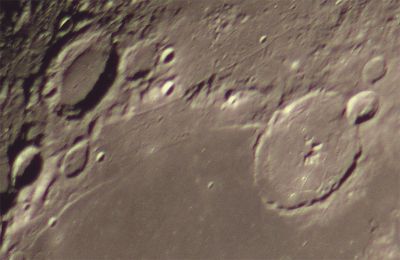 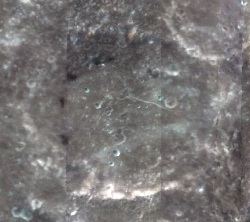 Left: Henrik Bondo, Mersenius is at the top left of this image, with the larger Gassendi on the right and the still larger Mare Humorum at bottom. Right: Closeup of Mersenius from Clementine

(IAU Directions) MERSENIUS.--With its extensive rill-system and interesting surroundings, one of the most notable ring-plains in the third quadrant. It is 41 miles in diameter, and is encircled by a fine rampart, which on the side fronting the Mare Humorum rises 7,000 feet above the floor, which is distinctly convex, and is depressed 3,000 feet below the region on the W., though it stands considerably above the level of the Mare. The prominently terraced border is tolerably regular on the N.E., but on the S. and S.W. is much broken by craters and depressions, the largest and most conspicuous interrupting the continuity of its summit-ridge on the latter side. A fine crater-row traverses the central part of the interior, nearly axially, and a delicate cleft crosses the N. half of the floor from the inner foot of the N.W. wall to a crater not far from the opposite side. I detected another cleft on November 11, 1883, also crossing the N. side of the floor.