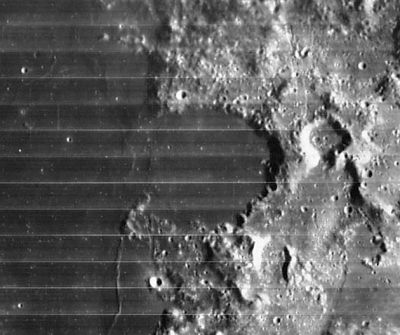 LOIV 078 H3
The High-Resolution scan of LOIV 078 H3 reveals the curious rille at the southeastern part of Le Monnier's floor, which was called Fossa Recta during the days of Lunokhod 2's exploration of Le Monnier's southern part.

LPOD Photo Gallery Lunar Orbiter Images Apollo Images
- The first frame in Apollo 15's color-Hasselblad magazine 87-KK (frame AS15-87-11695) shows crater Le Monnier L (south of Le Monnier itself and slightly northwest of Littrow Alpha). Crater Le Monnier L is seen near the frame's lower left corner, while the Command Module of Apollo 15 (the Endeavour) was captured near the frame's centre. On this online scan, north is toward the bottom of the frame.
- The second frame in magazine 87-KK (frame AS15-87-11696) shows the unnamed peninsula slightly northwest of Le Monnier L and east of the surface formation which was once called Fossae Pavlova (an unofficial name on the corresponding LTO map).
- Research Apollo 15 photography: Danny Caes

(IAU Directions) LE MONNIER.--A great inflection or bay on the E. border of the Mare Serenitatis S. of Posidonius. Like many other similar formations on the edges of the Maria, it appears at one time or other to have had a continuous rampart, which on the side facing the "sea" has been destroyed. In this, as in most of the other cases, relics of the ruin are traceable under oblique light. A fine crescent-shaped mountain, 3,000 feet high, stands near the S. side of the gap, and probably represents a portion of a once lofty wall. It will repay the observer to watch the progress of sunrise on the whole of the E. coast-line of the Mare up to Mount Argaeus.

Close-Up of a Rille (the curious chain of elongated depressions on Le Monnier's floor, which was explored by Lunokhod 2).
The end of Secrets (the discovery of Lunokhod 2 on high-resolution LRO images).