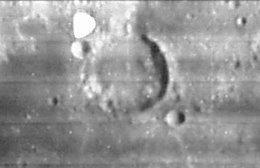 LPOD Photo Gallery Lunar Orbiter Images Apollo Images (Taruntius M)
- Lawrence was also captured on Apollo 17's panoramic ITEK-camera frames AS17-P-2971 and AS17-P-2976. When you explore these frames, it is not necessary to scroll to the right because Lawrence is already visible near the screen's centre.
- Research: Danny Caes

SLC-map A4 shows the remains of (what seems to be) some sort of Taruntius-sized crater southeast of Lawrence (between Lawrence and Taruntius).