Lassell - and Garcia-Gomez (Alpetragius B) east-northeast of it 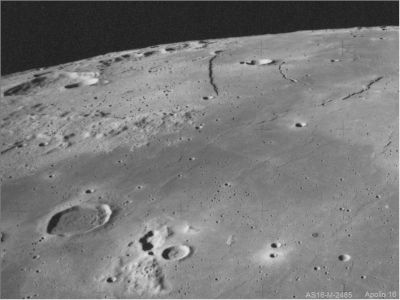 Apollo 16, AS16-M-2485 In this southward-looking oblique view, Lassell is the large polygonal crater in the lower left. To its right (west, adjacent to the hilly area known as the somewhat yellow colored Lassell Massif and the deeply-shadowed craters Lassell G and K) is 9-km Lassell C, followed by the pair Lassell D (bright) and J (normal), and finally by 5-km Lassell H in the lower right. In the far distance is the dark line of Rupes Recta, and to its right Birt, Rima Birt and an unnamed mare ridge.

(IAU Directions) LASSELL.--This ring-plain, some 14 miles in diameter, is irregular both as regards its outline and the width of its rampart. There is a crater on the crest of the N.E. wall, just above a notable break in its continuity through which a ridge from the N.E. passes. There is another crater on the opposite side. The central mountain is small and difficult to see. About 20 miles N.W. of Lassell is a remarkable mountain group associated with a bright crater, and further on in the same direction is a light oval area, about 10 miles across, with a crater (Alpetragius d) on its S. edge. Madler described this area as a bright crater, 5 miles in diameter, which now it certainly is not.

Clementine UV-VIS Multispectral Mosaic: Mercator projection dynamically created by USGS lunar Web Map Service. Click here for a USGS-generated list of all IAU-named features with centers in this field. Lassell D is the bright blue object on the left, Lassell C is the circular ring just to the left of center, and Lassell itself is the larger ring in the lower right.

The Cinder Cone near Lassell D and Lassell J

Color of the Lassell Massif