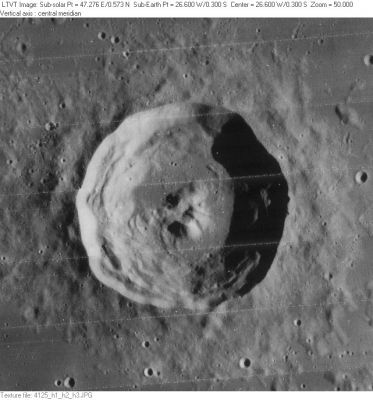 (IAU Directions) LANDSBERG.--A ring-plain, about 28 miles in diameter, situated in Mare Nubium, S.W. of Reinhold, which in many respects it resembles. Its regular massive border is everywhere continuous. Only a solitary crater breaks the uniformity of its crest, that rises on the E. to nearly 10,000 feet, and on the W. to about 7,000 feet above the floor, which is depressed about 7,000 feet below the surrounding surface. The inner slopes exhibit some fine terraces, and on the broad E. glacis is a curious winding valley, which runs up the slope from the S.E. side to the crater just mentioned, then, bending downwards, joins the plain at the foot of the N. wall. Neither this nor the crater is shown in the maps. The large compound central peak is apparently the sole object in the interior. At 8 h. 25 m. on January 23, 1888, when observing the progress of sunrise on this formation with a 8 1/2 inch Calver-reflector charged with different eyepieces, I noticed, when about three-fourths of the floor was in shadow, that the illuminated portion of it was of a dark chocolate hue, strongly contrasting with the grey tone of the surrounding district. This appearance lasted till the interior was more than half illuminated, gradually becoming less pronounced as the sun rose higher on the ring. W. and S.W. of Landsberg is a number of ring-plains and craters well worthy of careful examination. Five of the largest are surrounded by a glistening halo, and one (that nearest to the formation) and another (the largest of the group) have each a minute crater on their N. wall.

Lansberg
Did Luna 5 really came down southeast of Lansberg? The Wikipedia page of Luna 5 shows a totally different location.
Apollo 13's S-IVB stage impacted near Lansberg B south-southwest of Lansberg itself.

50 Years Uncertainty (the case of the curious fault/rille south of Lansberg).