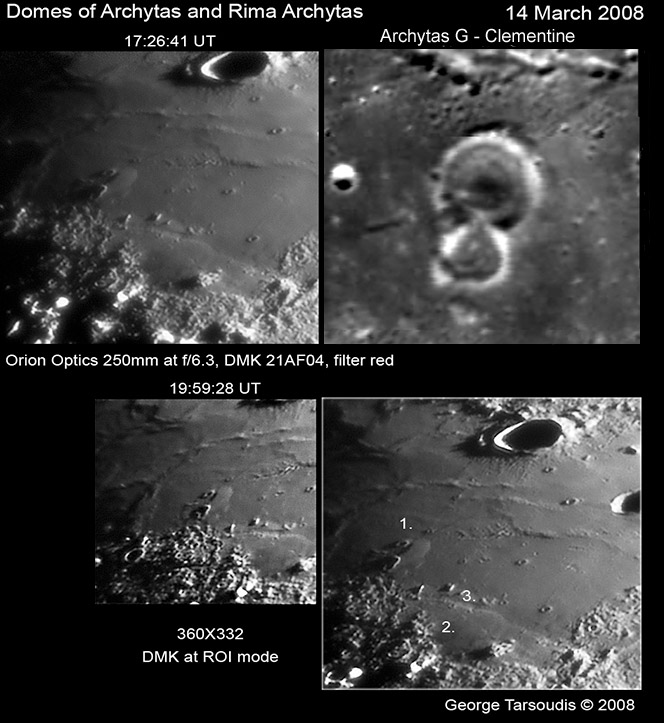 Frigoris is a sea with few dramatic landforms, but George has found a subtle mound that may improve understanding of an enigmatic class of lunar feature. George's two images (left top and bottom) show the area north of Plato with Archytas at the top of the frame. In the annotated frame George numbers two possible domes and the Archytas Rille (3). George suggests that object 2 might be a flat dome, but there is too little evidence to say for sure. Part of the feeling for a dome edge comes from the step down into the rille. Object 2 is an interesting area for it is darker at high Sun than the surrounding mare and appears to have fewer superposed craters. Object 1 is of more interest. It does appear to be a sharp-edged dome that extends from Archytas G to an unlettered crater to its north. Another dome is always worthy of study but this is especially exciting because Archytas G is one of about 50 concentric craters on the Moon. I've added a Clementine image excerpt that shows the donut-like inner ring in G, but isn't too clear about the interior of the smaller, overlapping crater to the south. The origin of concentric craters is vexing - are they some odd double rimmed impact crater formed when an impact occurs on a layered target? Or is the inner ring a result of some peculiar volcanism? The newly discovered relation of G to a volcanic dome adds support to the volcanic hypothesis. And is it coincidental that G lies along an extension of the trend of the sinuous rille Plato I? The Geologic Lunar Research group is studying these features and will soon have more understanding to share.

(1) Lunar Orbiter images IV-115H and IV-127H (and to a lesser extent, IV-116H) may be a little clearer than Clementine in showing the structure on the floor of the 5 km crater interlocking with Archytas G on the south. It is probably purely coincidental, but that inner structure looks like it might resemble some of the irregularly-shaped craters in which this area abounds -- including some of those in the interlocking chain shown at the top of the Clementine inset (and also perhaps better shown in the Lunar Orbiter images) that runs between Archytas G and the crater to its north, and over Object 1.

As to Object 1, Consolidated Lunar Atlas Plate A5 makes a nice supplement to George's photos which show Archytas G (0.5°E/55.6°N) at sun angles of +1.0 and +1.8°. In the CLA plate, the sun has risen to +3.1°, equivalent to what George would have seen about 00:43 UT on the 15th, as the Moon was setting from his location. The other CLA image of this region at low sun angle (Plate A9, sun angle +8.0°), shows the west side of Object 1 catching the setting Sun. On that side, Object 1 appears to extend over a shorter distance, and with what looks like a scooped out concave (rather than convex) shape.

P.S.: Lest readers be confused, the north end of Object 1 does indeed point towards an unlettered 2.4-km diameter crater at 1.7°E/56.4°N, but the prominent 5-km crater just below the "1" in George's labeled view is Archytas L. Since neither of these seems to have been labeled by Rükl (and not all readers have Rükl anyway), they may wish to consult the USGS Digital Atlas page for LAC Zone 12. These lettered crater names seem to have been introduced in the System of Lunar Craters (see Section D1 map). NASA's LAC 12 (dated January, 1967) shows that Archytas L later served as a control point for getting the coordinate grid in the right place on that map.