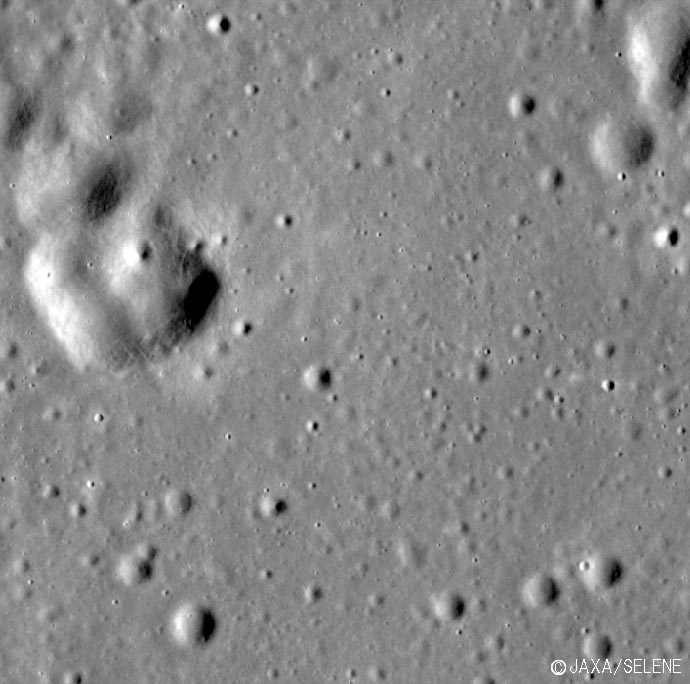 Here is your chance to be famous. This excellent Kaguya high resolution image of the Apollo 11 landing area is the first published one with adequate resolution to compare with high resolution Apollo and Lunar Orbiter images of 40 years ago. Are there any new craters on this 2008 image that aren't on the old ones? The likelihood of any new crater being discovered depends on the diameters of the craters examined. So how big are the craters on this image? I haven't found accurate measures anywhere, but the large overlapping crater cluster at upper left - the astronaut-named Cat'sPaw - is about 2 km wide, so small sharp craters perhaps 50 m wide should be visible here. We know from observed flashes on the Moon during meteor showers that meter-scale craters form frequently. While we don't have a crater production rate for larger lunar craters, we do for Mars. Amazingly, the very high resolution Mars Global Surveyor camera detected 20 craters of diameters 2 to 125 m that formed between May 1999 and March 2006 in an area of 21 million square kilometers. Well, this Kaguya image covers a much smaller area (~ 50 sq km) so the chances of discovering a new crater are not high - about 3 in a 1000 - but there may be one!

Technical Details
Another day without an amateur image...

(2) Those following the "Cat's Paw" link will find sections of Lunar Orbiter V image 076 (medium and high-resolution) displayed by LTVT. The first is very suitable for a new crater search because both the lighting and the resolution are very similar to Kaguya. The key to the scale is in the Zoom factor displayed in the upper right of the LTVT images. At a Zoom of 1 the LTVT screen exactly spans the full diameter of the Moon (2x1737.4 = 3475 km). The medium resolution view on the left says it is displayed at a Zoom of 150. That means it covers exactly 1/150th of the Moon's diameter, or 3475/150 = 23 km. The high resolution fragment on the right says it is at a Zoom of 4000, so it spans 3475/4000 = 869 meters.

Based on the features that can be recognized in it, the Kaguya image must be approximately 10.5 km on a side. At around 695 pixels that means each pixel spans roughly 15 meters. So 50 meters is a reasonable estimate of the smallest pit likely to be detected (although the area represented is a bit larger than guessed).

(3) A further thought: for a given sensor size, is there an optimal magnification for looking for changes? In other words, with the present number of pixels would the odds be increased by searching for fresh 5 m craters in a 1 km by 1 km area? How about using the same number of pixels to look for fresh 50 mm impacts in an area 10 m by 10 m? Is finer resolution always better? And does one reach a scale where the probability of observing a change over 40 years reaches a near certainty (for example, re-examining a single bootprint left by an Apollo astronaut)?

(4) Obviously, it will take many, many re-photographed images of the same lunar regions before any definitive study of new impact craters (and their rates) can be recorded. While the labour-time alone in going through each image, I'm sure, would take upto several years -- perhaps, even more -- before any new discoveries were made, I'm wondering, therefore, about recording of their rates. Perhaps, it might be time to seriously return to the seismometers' setup that the Apollo missions (1969 - 72) used; where upto ~ 1800 meteroid impacts were recorded over an 8-year period (before the seismometers were finally turned off in 1977). While it was estimated that all the events recorded were produced by meteroids (both comets and asteroids alike) with masses from between 100 g to 100 kg, their rate over that period must give some idea as to what we might expect to look out for (that is, discover) in the new, high-resolution photographs over the coming years. -- John -- www.moonposter.ie