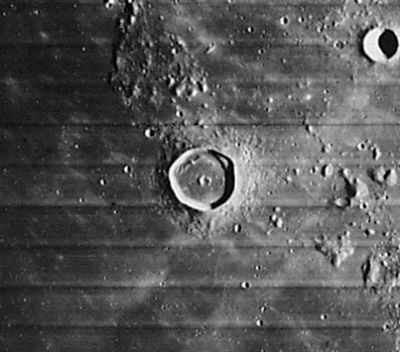 (IAU Directions) KUNOWSKY.--An inconspicuous ring-plain, about 11 miles in diameter, standing in a barren region in the Mare Procellarum, E.S.E. of Encke. The central mountain is tolerably distinct.

Georg Karl Friedrich Kunowsky (1786 – December 23, 1846) was a German lawyer who also was a talented amateur astronomer. He made observations of Mars with an 11 cm achromatic refractor telescope made by Joseph von Fraunhofer, which was one of the first times that achromatic refractors were used for planetary observation; these were a notable improvement over the reflectors available to earlier observers. He also made observations of the Moon, and was one of a number of astronomers to independently discover the return of Comet Halley in 1835.