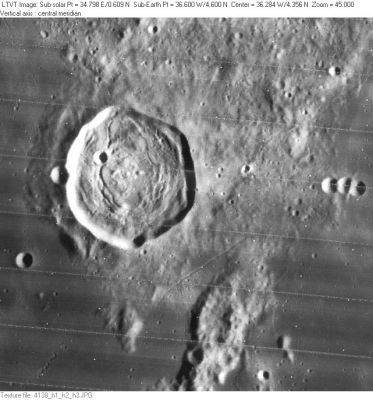 LO-IV-138H1 Encke is the large polygonal floor-fractured crater with 4-km Encke N on its west rim.
In the mare to the southwest of that is the identically-sized Encke H; while on the right, the easternmost of the triplet of 3-km diameter craters is Encke M.
The rille to the southeast of Encke and the catena in the extreme lower left of the frame are officially unnamed.

LPOD Photo Gallery Lunar Orbiter Images Apollo Images
A close-up of Encke C, a bowl-shaped crater south of Encke and Encke B, is seen on Frame 1154, made by Lunar Orbiter 1. Research: Danny Caes

(IAU Directions) ENCKE.--A regular ring-plain, 20 miles in diameter, with a comparatively low border, nowhere rising more than 1,800 feet above the interior, which is depressed some 1,000 feet below the surrounding Oceanus Procellarum. A lofty ridge traverses the floor from S. to N., bifurcating before it reaches the N. wall. There is a bright crater on the E. wall, and a depression on the opposite wall, neither of which, strange to say, is shown on the maps. Encke is encircled by ridges, which, when it is on the morning terminator, combine to make it resemble a large crater surrounded by a vast mountain ring.

The triplet at Encke M

Johann Franz Encke (23 September 1791 – 26 August 1865) was a German astronomer. Encke became famous as the discoverer of the short periodic comets. The first object of this family, the Encke comet, was named after him and so it is one of the few comets not named after the discoverer, but after the one who calculated the orbit. Later this comet was identified as the origin of the Taurids meteor showers.

Delta-Rim Craters
A dome or no dome?
Streamlined Islands (Mike Wirths's wonderful telescopic photograph of the Encke/Kepler region with the curious triplet east of Encke).