(IAU crater name. The informal name for the patch of bright ejecta seen in this area at Full Moon is Cassini's Bright Spot. The IAU name Hell Q originally referred to this bright patch, rather than to a crater, and the present crater was probably known at that time as Hell H) 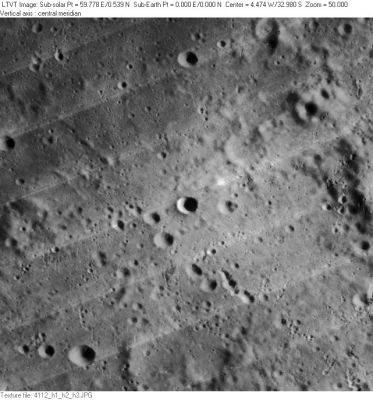 LO-IV-112H The crater presently known as Hell Q (see Nomenclature) is at the center of this view depicting a relatively small area on the floor of Deslandres. The Lunar Orbiter image has been remapped to a zero-libration (Earth-based) view, which accounts for the elliptical shape of the craters. To the northeast of Hell Q is a small sunlit peak, and beyond that the weathered 8-km diameter crater Walther G. The area between these becomes quite bright around Full Moon, creating a feature that is informally known as Cassini's Bright Spot. An identically scaled Clementine image, taken with a higher Sun angle, shows the area of the bright ejecta more clearly. The effect becomes even more striking when the area is viewed along the direction of the sunlight (for example from Earth at Full Moon). Under those circumstances, the ejecta become brighter still, and the surrounding shadowed topography fades, leaving a bright spot seen against a bland background.

Hell Q is a rather ordinary crater. The main reason for there being any interest in it is that it is fresh, and seems to be the source of a patch of bright ejecta that dust the surrounding area, especially (the result of an oblique impact?) some gentle slopes to its northeast. The patch becomes particularly bright and extensive looking around the time of Full Moon. The early telescopic observer Giovanni Cassini is thought to have mistaken it for a temporary white cloud, hence the informal name.

(IAU Directions) in his List Of The Principal Ray-Systems, Light-Surrounded Craters, And Light-Spots: Hell. A large ill-defined spot in W. long. 4 deg., S. lat. 33 deg. This is most probably the site of the white cloud seen by Cassini.