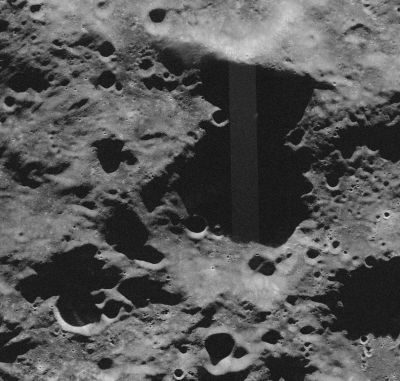 Donald and Bruce Campbell Haworth is the prominent pentagonal crater near the center of this field cropped from a stereographic projection of the Moon's south polar area "photographed" with 12.6 cm radar pulses. The direction towards Earth is at the top. The ridge above Haworth is unofficially known as Malapert Alpha (a discontinued IAU name). Shoemaker is partially visible in the lower right. What look like shadows are areas that were not visible from Earth, and hence for which no data were collected. None of the other features in this field have IAU-approved names.

Haworth is the prominent 35-km diameter pentagonal crater seen just beyond Malapert Alpha in radar maps of the lunar south pole (to the upper left of "Sh" = Shoemaker in this one, for example). Since the radar can see it, it must, in theory, be visible from Earth, but because it is in nearly permanent shadow it is rarely, if ever, obvious -- even in photographs taken from space. We know of its existence because radar beams from Earth can occasionally reach into it at a steeper angle than sunlight can. - Jim Mosher