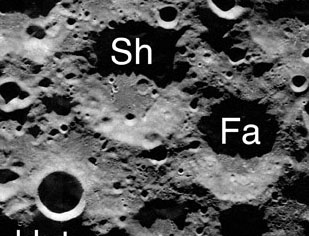 Earth-based radar view by Campbell et al.: In the LPOD image from which this has been cropped, the Earth-based radar data was re-mapped to a north-up aerial view. Shoemaker is the crater labeled Sh. The one labeled Fa is Faustini. Shackleton, the IAU-named feature closest to the Moon's South Pole, is in the lower left, with only its lower rim illuminated by the radar waves.