Gauss - and "Rimae Gauss" on its floor 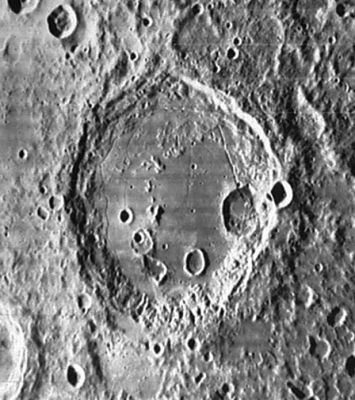 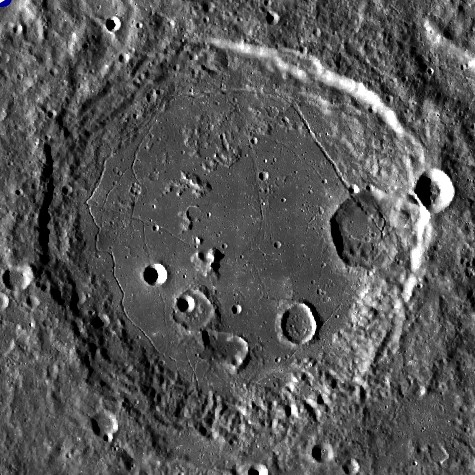 (IAU Directions) GAUSS.--A large, and nearly circular walled-plain, 111 miles in diameter, situated close to the N.E. limb, and consequently always foreshortened into a more or less elongated ellipse. But for this it would be one of the grandest objects in the first quadrant. Under the designation of "Mercurius Falsus" it received great attention from Schroter, who gives several representations of it in his Selenotopographische Fragmente, which, though drawn in his usual conventional style, convey a juster idea of its salient features than many subsequent drawings made under far better optical conditions. The border, especially on the E., is very complex, and is discontinuous on the S., where it is intersected by more than one pass, and is prolonged far beyond the apparent limits of the formation. The most noteworthy feature is the magnificent mountain chain which traverses the floor from N. to S. It is interesting to watch the progress of sunset thereon, and see peak after peak disappear, till only the great central boss and a few minute glittering points of light, representing the loftier portions of the chain, remain to indicate its position. Madler expatiates on the sublime view which would be obtained by any one standing on the highest peak and observing the setting sun on one side of him and the nearly "full" earth on the other; while beneath him would lie a vast plain, shrouded in darkness, surrounded by the brilliantly illuminated peaks on the lofty border, gradually passing out of sunlight. In addition to the central mountain range, there are some large rings, craters, hillocks, &c., on the floor; and on the inner slope of the E. border there is a very large circular enclosure resembling a ring-plain, not recorded in the maps. Schmidt shows a row of large craters on the outer slope of the W. border. Of these, one is very conspicuous under a low evening sun, by reason of its brilliant walls and interior. In the region between Gauss and Berosus is a number of narrow steep ridges which follow the curvature of the W. wall.

A Crater with Everything. Gaussian Blur