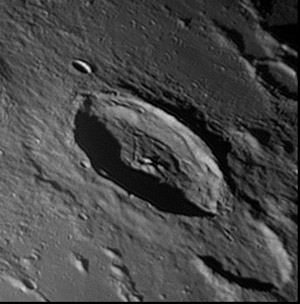 (IAU Directions) FRANKLIN.--A ring-plain, 33 miles in diameter, which displays a considerable departure from the circular type, as the border is in great part made up of rectilineal sections. Both the E. and N.W. wall is much terraced, and rises about 8,000 feet above the dark floor, on the S. part of which there is a long ridge. There is a bright little isolated mountain on the plain W. of the formation, and a conspicuous craterlet on the N.E. An incomplete ring, with a very attenuated border, abuts on the S. side of Franklin.