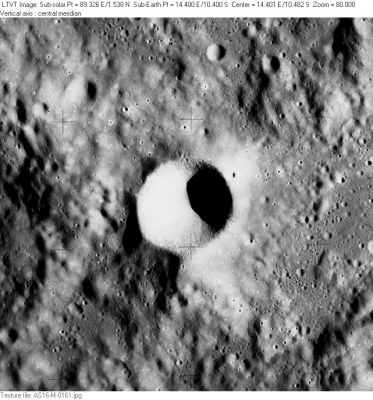 LPOD Photo Gallery Lunar Orbiter Images Apollo Images
- Quite an amount of reflected light is noticeable on the shadowed inner slopes of satellite crater Dollond E, which is the northern one of the pair of bright bowl shaped craters in the curious high-albedo region east of Dollond itself, once called Caramuelis by Van Langren. The southern one of the pair is Descartes C. Perhaps the best orbital photograph to explore the shadowed eastern inner slopes and flat floor of Dollond E is the Arizona State University's zoomify scan of Apollo 16's southward looking mapping/metric Fairchild camera frame AS16-M-0701, in which Dollond E was captured near the frame's upper right corner. While exploring this photograph, please zoom in at maximum on Dollond E itself! The amount of detail on the shadowed slopes is remarkable!
- Research orbital Apollo 16 photography: Danny Caes.

(IAU Directions) DOLLOND.--A bright crater, about 6 miles in diameter, on the N.W. side of Descartes. Between it and the latter there is a rill-valley.

Ruins of a very ancient large crater north-northeast of Dollond