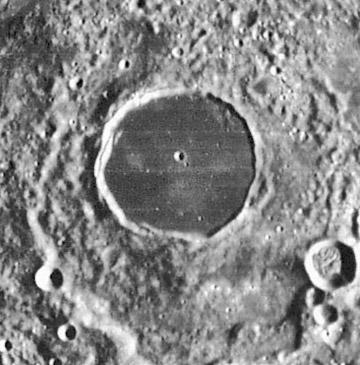 Lunar Orbiter IV-168-h2
Partially seen in this frame is the rim of a large unnamed crater which is surrounding the much smaller dark crater Cruger in an eccentric way.

LPOD Photo Gallery Lunar Orbiter Images Apollo Images
Concentric Crater number 42 in C.A.Wood's list (published in 1978) must be one of the tiny craterlets between Cruger and Cruger E east-southeast of it. On the Hi-Res scan of Lunar Orbiter 4's photograph LOIV-168-h2 there is indeed something noticeable which looks like a Concentric Crater (immediately east of Cruger). See: LOIV-168-h2, near the frame's lower right corner.
Research: Danny Caes

(IAU Directions) CRUGER.--A regular ring-plain W. of Fontana, 30 miles in diameter, with a dark floor, without detail, and comparatively low bright walls. There is a smaller but very conspicuous ring-plain (Cruger a) on the E. of it, to which runs a branch of the great Sirsalis cleft.