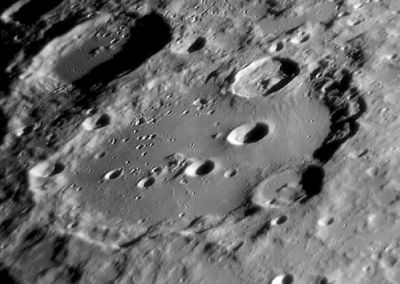 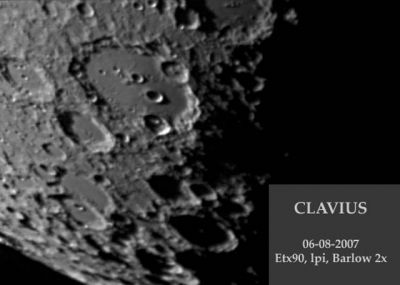 (IAU Directions) CLAVIUS.--There are few lunar observers who have not devoted more or less attention to this beautiful formation, one of the most striking of telescopic objects. However familiar we may consider ourselves to be with its features, there is always something fresh to note and to admire as often as we examine its apparently inexhaustible details. It is 142 miles from side to side, and includes an area of at least 16,000 square miles within its irregular circumvallation, which is only comparatively slightly elevated above the bright plateau on the E., though it stands at least 12,000 feet above the depressed floor. At a point on the S.E. a peak rises nearly 17,000 feet above the interior, while on the W. the cliffs are almost as lofty. There are two remarkable ring-plains, each about 25 miles in diameter, associated, one with the N., and the other with the S. wall, the floors of both abounding in detail. The latter, however, is the most noteworthy on account of the curious corrugations visible soon after sunrise on the outer N. slope of its wall, resembling the ribbed flanks of some of the Java volcanoes. There are five large craters on the floor of Clavius, following a curve convex to the N., and diminishing in size from E. to W. The most easterly stands nearly midway between the two large ring-plains on the walls, the second (about two- thirds its area) is associated with a complex group of hills and smaller craters. Both these objects have central mountains. In addition to this prominent chain, there are innumerable craters of a smaller type on the floor, but they are more plentiful on the S. half than elsewhere. On the S.W. wall are three very large depressions. On the broad massive N.W. border, the bright summit ridge and the many transverse valleys running down from it to the floor, are especially interesting features. There are very clear indications of "faulting" on a vast scale where this broad section of the wall abuts on the N. side of the formation.

A Christmas Present.
Where's Clavius?
Image Planning and Presentation.
Swept Away
What a Difference a Day Makes
Sunset over Clavius
Skimming the Surface

L9: Lacks basin features in spite of its size.