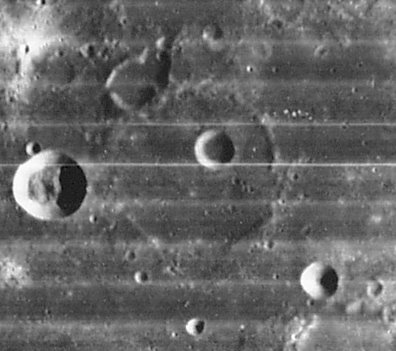 - tychocrater Jul 15, 2007 It is the curse of a Moon atlas author to have to describe every named feature, even those for which there is little to say. Chevallier' is about the same size as Krafft and originally probably was about as deep - 3.5 km - with terraced walls and a central peak. All that is long gone. Something, probably mare lava associated with nearby Lacus Temporis, flooded Chevallier nearly to its rim, and its surface has been dusted by impact ejecta. lightening it so it is bright like the highlands. Just north of Chevallier is a small, very bright, oblique impact ray crater.
- DannyCaes Jun 19, 2011 The chaotic inner slopes and floor of the high-albedo oblique impact ray crater northwest of Chevallier and east of the couple Hercules/'Atlas (nicknamed Atlas' Companion by Bill Dembowski) could be investigated at LON: 49.82, LAT: 46.74 on the LRO's magnificent ACT-REACT Quick Map.
Note: visitors of this ACT-REACT Quick Map who have the capability of looking "parallel" could see a remarkable 3D-STEREO effect in the two depicted photographs of the same region (these two photographs were made at different angles, a fact which is visible in the dark streak on the craterlet's bright northern inner slope).

(IAU Directions) CHEVALLIER.--An inconspicuous object enclosed by slightly curved ridges. It includes a deep bright crater. On the N. is a low square formation and a long ridge running N. from it. Just beyond the N.W. wall is the fine large crater, Atlas A, with a much smaller but equally conspicuous crater beyond. A has a central hill, which, in spite of the bright interior, is not a difficult feature.

Temple Chevallier (October 19, 1794 - November 4, 1873) was a British clergyman, astronomer, and mathematician. Between 1847 and 1849, he made important observations regarding sunspots.