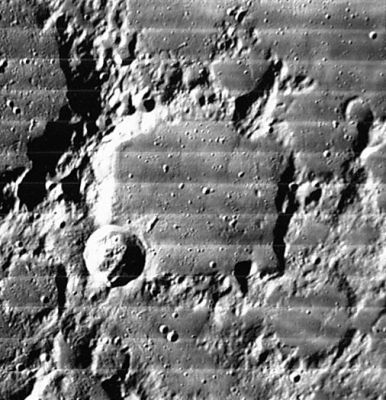 (IAU Directions) BARROW.--There are few more striking or beautiful objects at sunrise than this, mainly because of the peculiar shape of its brilliant border and the remarkable shadows of the lofty peaks on its eastern wall. There is a notable narrow gap in the rampart on the E., which appears to extend to the level of the floor. The walls, especially on the S., are very irregular, and include two large deep craters and some minor depressions. If the formation is observed when its W. wall is on the morning terminator, a fine view is obtained of the remarkable crater-row which winds round the N. side of Goldschmidt. Barrow is about 40 miles in diameter. According to Schmidt, there is one crater in the interior, a little S.W. of the centre.

A wonderful clair-obscur effect is always visible when the morning terminator runs over Barrow. The effect looks like a shaft of light on Barrow's floor and western wall. For photograph, see: LPOD of may the 13th, 2008.

Isaac Barrow (October 1630 - May 4, 1677) was an English divine, scholar and mathematician who is generally given minor credit for his role in the development of modern calculus. Isaac Newton was a student of Barrow's.