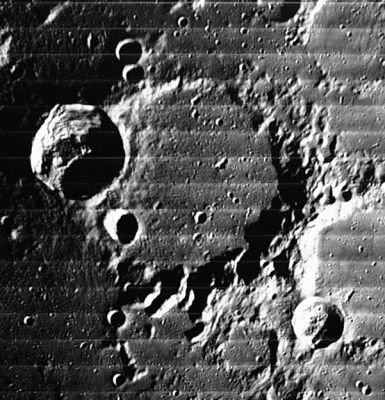 (IAU Directions) GOLDSCHMIDT.--A great abnormally-shaped enclosure with lofty walls between Epigenes and the limb. Neison mentions only two crater-pits within. I have seen the rimmed crater shown by Schmidt on the E. side and three or four other objects of a doubtful kind.

Hermann Mayer Salomon Goldschmidt (June 17, 1802–April 26, 1866) was a German astronomer and painter who spent much of his life in France.
Perhaps also interesting to include in this page:
Victor Mordechai Goldschmidt (1853-1933; mineralogist, natural philosopher, art collector).
Victor Moritz Goldschmidt (1888-1947; mineralogist, considered to be the founder of modern geochemistry and crystal chemistry).

(in this article mentioned as -Victor Goldschmidt of Heidelberg- , which (according to Wikipedia) must be Victor Mordechai Goldschmidt).