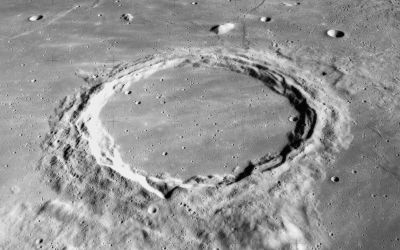 Here is an experimental audio file (1:12 minute) of me talking about Archimedes.

(IAU Directions) ARCHIMEDES.--Next to Plato the finest object on the Mare Imbrium. It is about 50 miles in diameter. The average height of its massive border is about 4,000 feet above the interior, which is only depressed some 500 or 600 feet below the Mare, the highest peak (about 7,000 feet) being on the S.W. The walls are terraced, and include much detail, both within and without. The most noteworthy features in connection with this formation are the crater-cones, craterlets, pits, white spots, and light streaks which figure on the otherwise smooth interior. Mr. T.P. Gray, F.R.A.S., of Bedford, who, with praiseworthy assiduity, has devoted more than ten years to the close scrutiny of these features, Mr. Stanley Williams, and others, have detected four crater-cones on the W. half of the floor, and about fifty minute craters and white spots, also probably volcanic vents, and a very curious and interesting series of light streaks, mostly traversing the formation from W. to E. A little W. of the ce
ntre is a dusky oval area about 6 miles across, and S.E. of this is another, much smaller. Under some conditions of illumination the two principal light markings may be traced over the E. wall, and for some distance on the plain beyond.

On the southern side of Archimedes is a very rugged mountain region, extending for more than 100 miles towards the south: on the E. of this originates a remarkable rill-system, best seen under evening illumination. The two principal clefts follow a nearly parallel course up to the face of the Apennines near Mount Bradley, crossing in their way, almost at right angles, other clefts which run at no great distance from the W. foot of this range and ramify among the outlying hills. Archimedes A is a brilliant little ring-plain on the S.W. of Archimedes. It casts an extraordinary shadow at sunrise, and has a well-marked crater-row on the W. of it, and two long narrow valleys, one of which appears to be a southerly extension of the row.