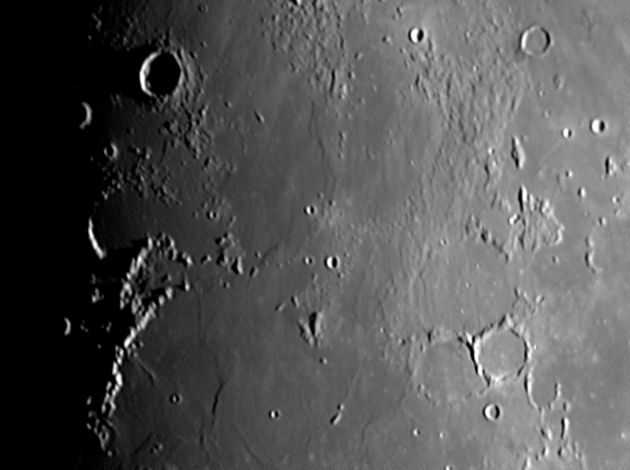 LPOD Photo Gallery images Lunar Orbiter Images Apollo Images
Mike Constantine's assembled panorama of Apollo 14's landingsite, looking east. The low hills behind LM Antares are the slopes of Cone crater. Those near the panorama's right margin are the slopes of Old Nameless. The bright spot on top of the LM's Ascent Stage is not a reflection of the sun, as mentioned above Mike's panorama, it is the partially obscured sun itself! - DannyCaes Feb 6, 2008

A possible discovery? (specular reflection on a lunar rock?).
Surface Hasselblads AS14-66-9281, 9282, and 9283 were made in eastern direction, toward the slopes of the distant Cone crater. These three images show lots of shadowed dimple craterlets (upsun photographs). In each one of these three images, a curious bright dot is visible below and to the left of the sun's position (the dot is located on the lunar surface). Could it be that this bright dot is some sort of solar reflection at a rock's mirror-like flat surface? Was this bright dot noticed before?
The High-Resolution scans of these three upsun Hasselblads:
AS14-66-9281
AS14-66-9282
AS14-66-9283
- DannyCaes Feb 4, 2008

The landing site itself has no official name. - JimMosher

Making Trails (the Lunar Reconnaissance Orbiter's spectacular High-Resolution close-up image of Apollo 14's landing site and nearby ALSEP-station, and the astronaut/ MET tracks in between them!).