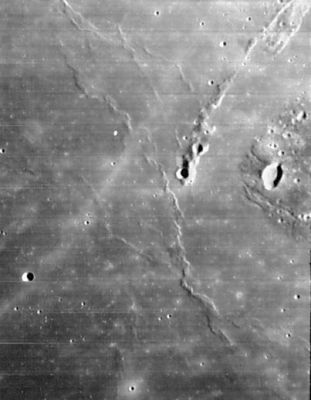 LOIV 163 H1 The bright arc of elevated material running diagonally into the frame from its upper right corner is Montes Agricola. Below it is the western edge of the Aristarchus Plateau, with the prominent crater Raman. Dorsa Burnet is the ridge system that runs cross-ways to Montes Agricola, just off its southern tip. The converging ridges just above Montes Agricola are part of the separately named Dorsa Whiston.