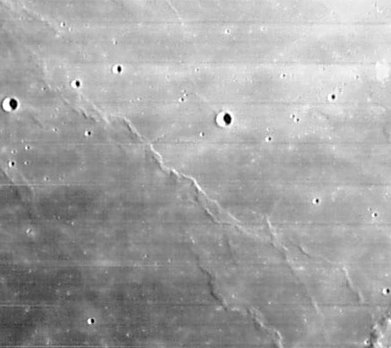 LOIV-163-H1 The crater near the left-hand margin is Lichtenberg H, and the slightly larger one to the right of center from it is Humason. A small piece of Montes Agricola is visible in the extreme lower right corner of the frame. Dorsa Whiston is the ridge system that starts east of Lichtenberg H and runs towards Montes Agricola, forking just at the end. To the left (west) of the fork is the northern part of Dorsa Burnet. The stub of ridge crossing the left-hand margin just below Lichtenberg H is the southern tip of Dorsum Scilla.

LPOD Photo Gallery Lunar Orbiter Images
Dorsa Whiston was also photographed during the mission of Apollo 15, on color Hasselblad film, see AS15-97-13264 and 13265. Both orbital Hasselblad frames could be stitched together to create one single overview of the dorsa.
Research: Danny Caes