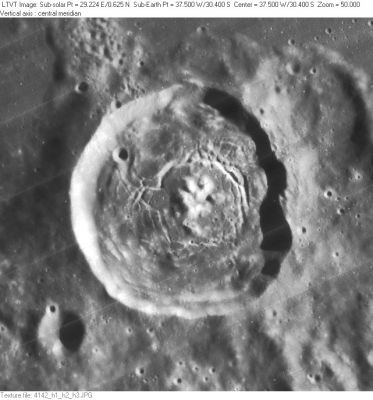 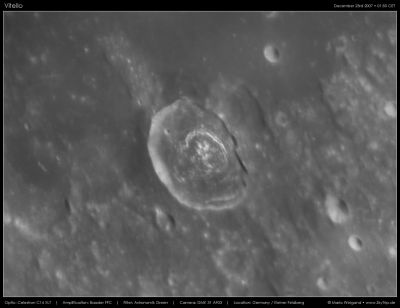 Left: LO-IV-142H Overhead view. The 9-km diameter circular crater in the lower left is Vitello P. The large depression in the upper right is unnamed. Right: Mario Weigand In this Earth-based view, several letttered craters named after Vitello are visible as well as the ghostly arcs of 41-km Lee and 77-km Lee M on the left.

(IAU Directions) VITELLO.--A very peculiar ring-plain, 28 miles in diameter, on the S. side of the Mare Humorum, remarkable for having another nearly concentric ring-plain, of considerably less altitude within it, and a large bright central boss, overlooking the inner wall, 1,700 feet in height. The outer wall is somewhat irregular, and is broken by gaps and valleys on the S. and N.E. It rises on the W. about 5,000 feet above the Mare, but only about 2,000 above the interior, which includes a crater on its N. side, and some low ridges.

Discovery of a long lobate scarp with several wrinkle ridges, south of Vitello