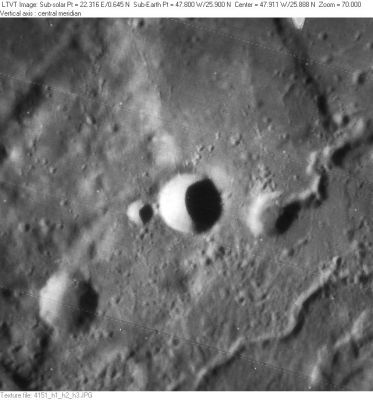 LO-IV-151H Väisälä is in the center. The crater in the lower left is Aristarchus Z. The rilles are part of Rimae Aristarchus.

LPOD Photo Gallery Lunar Orbiter Images Apollo Images
Important note: the two panoramic ITEK-camera frames mentioned in the LPI's list of orbital Aristarchus A photographs show only the eastern shadowed inner slopes of it (AS15-P-10326) and nothing but the cobrahead-shaped "source" of Rima Aristarchus IV immediately east of it (AS15-P-10331).
The whole of Aristarchus A (Vaisala) was captured on the two frames following the above mentioned: AS15-P-10328 and AS15-P-10333.
Additional research: Danny Caes