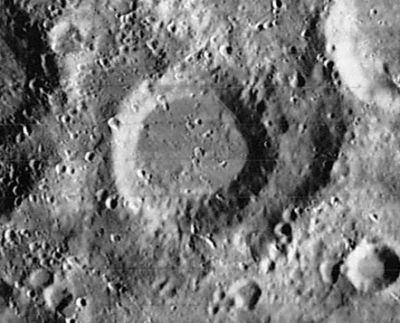 (IAU Directions) SAUSSURE.--A ring-plain E. of Tycho, 28 miles in diameter, with bright lofty terraced walls and a somewhat dark interior, on which there is a crater, E. of the centre, and some crater-pits. There are several large depressions on the S.E. wall. It is surrounded by formations which, though nearly as prominent as itself, have not, with the exception of Pictet on the W., and one on the N.E., called Huggins by Schmidt, received distinctive names. The region E. of Saussure abounds in craterlets, some of which are of the minutest type. One of the Tycho streaks is manifestly deflected from its course by this formation, and another is faintly traceable on the floor.

Horace-Bénédict de Saussure (February 17, 1740 - January 22, 1799) was a Swiss aristocrat, geologist, physicist and Alpine traveller, often considered the founder of alpinism. His early interest in botanical studies naturally led him to undertake journeys among the Alps, and from 1773 onwards he directed his attention to the geology and physics of that region. This work did much to clear up the topography of the snowy portions of the Alps.