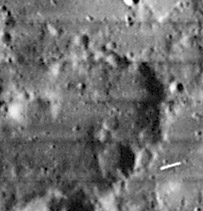 (IAU Directions) POISSON.--An irregular formation on the E. of Aliacensis, extending about 50 miles from E. to W., but much less in a meridional direction. Its N. limits are marked by a number of overlapping ring-plains and craters, and it is much broken elsewhere by smaller depressions. The W. wall is about 7,000 feet in height.