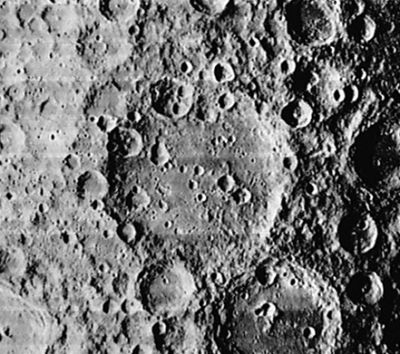 LO-II-196M Pasteur is at the center of this view which extends from 43-km Ganskiy on the west (relatively small crater with central peak cut by center left margin) to 87-km Meitner on the east (cut by center right margin). Below Pasteur (just outside the rim at about 7 o'clock) is 75-km Backlund, and to its east, the upper part of 151-km Hilbert. The large crater partially visible in the extreme lower left corner is 127-km Sklodowska. The smaller IAU-named craters Khvol'son, Ludwig and Debus are also visible in this medium resolution Lunar Orbiter II view.