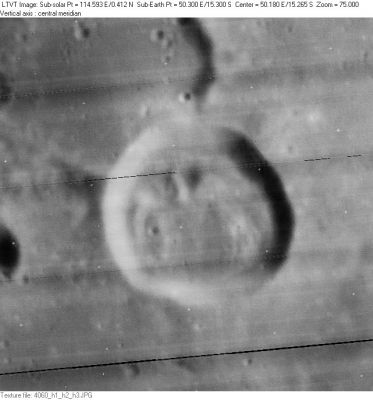 LO-IV-060H McClure is in the center. The 27-km crater partially visible in the upper left is McClure C. The shadow on the far left is from the east rim of 9-km McClure B.

LPOD Photo Gallery Lunar Orbiter Images Apollo Images
WARNING: the name McClure is mentioned on many orbital frames of Apollo 12's three stereo-strips 56-B, 56-C, and 56-D. In fact, most of these frames don't show McClure at all! All the frames of these three stereo-strips show the same caption: DESCARTES - LALANDE - MCCLURE - THEOPHILUS (which seem to have been four of the most important "landmarks" on these stereo-strips).- DannyCaes Aug 15, 2010
- Apollo 8's oblique southward-looking Hasselblad frame AS08-13-2219 shows McClure near the frame's upper right corner.
Research: Danny Caes.
HiRes scan of Apollo 8 photograph: David Woods and Frank O'Brien (Apollo 8 Flight Journal).

(IAU Directions) MACCLURE.--One of a curious group of formations situated in the Mare Fecunditatis some distance S.E. of Goclenius. It is a bright ring-plain, about 15 miles in diameter, with a narrow gap in the N.W. wall and a small central hill. A prominent ridge runs up to the N. border; and on the S.E. a rill-valley may be traced, extending S. to a bright deep little crater E. of Cook.