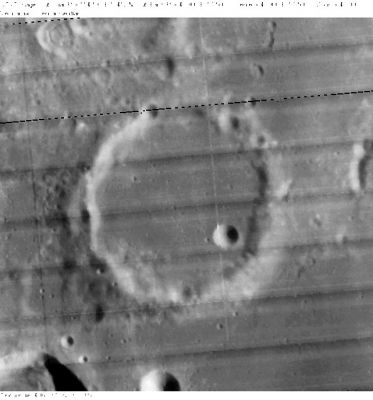 LO-IV-060 The 6-km crater on the floor is Cook A. The craters partially visible along the lower margin are 36-km Monge and 9-km Cook G.

LPOD Photo Gallery Lunar Orbiter Images Apollo Images
- Although there seem to be no orbital Apollo photographs in the LPI's list for Cook, there are several of Apollo 16's south looking Fairchild-camera frames which show the dark floor of that crater! One of those frames is AS16-M-0676, which shows Cook near the central part of the curved horizon. In this frame, Cook is the crater with the small bright bowl-shaped craterlet on its floor.
Research: Danny Caes.

(IAU Directions) COOK.--A ring-plain, about 25 miles in diameter, on the W. side of the Mare Foecunditatis in S. lat. 17 deg., with low and (except on the S.W.) very narrow walls. There is a small circular depression on the S. border, and a prominent crater on the E. side of the dark interior. On the S.S.W. is the curiously shaped enclosure Cook d, with very bright broad lofty walls and a fine central mountain. On the plain E. of Cook is a conspicuous crater-row, consisting of six or seven craters, diminishing in size in both directions from the centre.