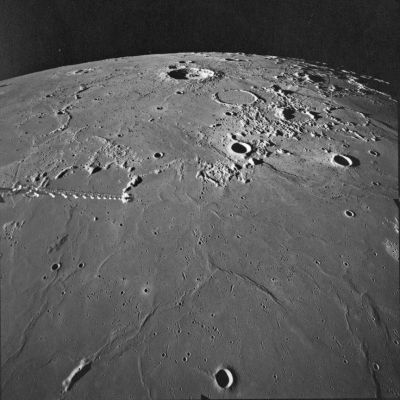 Apollo 16 AS16M-2493
Southward oblique Fairchild-camera view of the southern part of Mare Cognitum.
The big crater near the curved horizon is Bullialdus. The small bowl-shaped crater near the bottom of the frame is Kuiper. The elongated hill near the frame's lower left corner is Bonpland Omega, very near the impact site of Ranger 7.

Mare Cognitum; “the sea that has become known”, with a diameter of 376 km (10.0 S 23.1 W), is located in a basin that sits within the proposed second ring of the Procellarum basin. The mountain range Montes Riphaeus to the northwest of the region may represent part of the rim-crest of a large buried crater, containing the mare. It's very strange, to see no continuing rim of the large Riphaeus crater on chart SLC E5 (System of Lunar Craters, 1966). Don Davis made interesting paintings of the violent Riphaeus event (the creation of the large impact crater) for Carl Sagan's book COSMOS.

Ranger 7 in the eastern part of Mare Cognitum