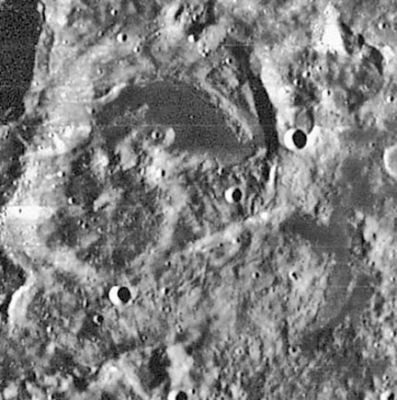 LOIV-168-h2 The IAU's Lacus Aestatis is the vertically elongated feature near the right margin of this photo. The horizontally elongated one above center seems to have been part of the original feature as drawn by Franz (Baum and Whitaker, 2007), but it seems now to be regarded (at least as far as nomenclature) as a separate feature on the floor of Rocca A (which more than fills the upper left quadrant of the frame). The crater Crüger, just out of the view to the SE, has an even more extensive dark floor. (note: the very dark feature in the extreme upper left corner is not a mare surface. It is the shadow cast by the east rim of Rocca)