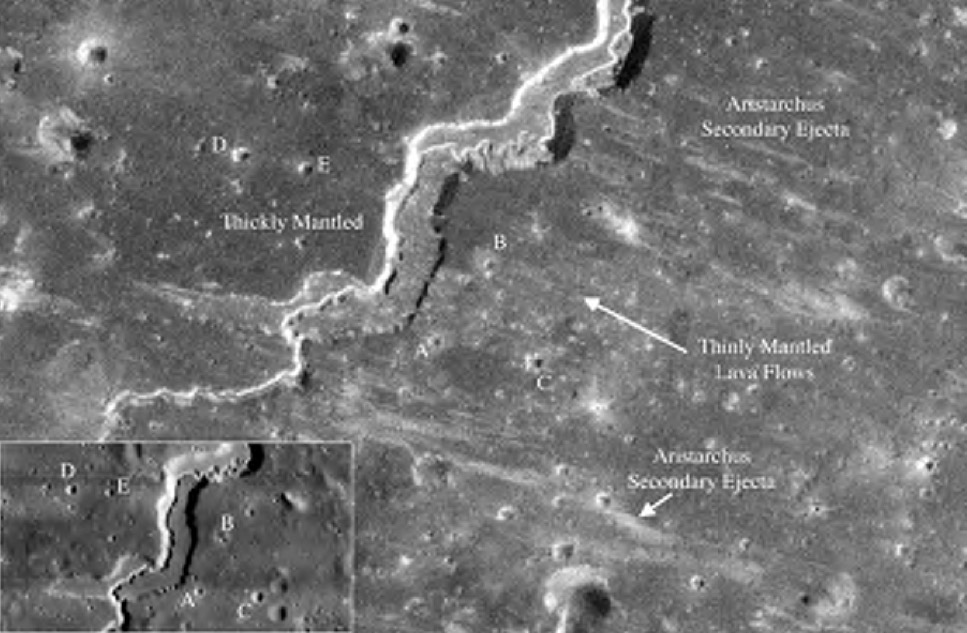 image from Don Campbell and others, 2008 LPSC

The Aristarchus Plateau is one of the most unusual features on a Moon. It is not an impact structure and not any type of standard volcanic landform. It contains the largest sinuous rille on the Moon - Schröter's Valley - which is many times wider than standard ones snaking across maria. The Valley is believed to be the source for much of the lava that fills northern Oceanus Procellarum, but there has little evidence for individual lava flows. The image above now provides the evidence - notice the slightly brighter region that extends across the middle of the image from below the crater labelled B nearly to the right edge? The irregular boundary of this bright region is diagnostic of a lava flow - compare with young ones in Mare Imbrium. This flow originated at the Valley and appears to have moved to the east. This is unexpected because to the east is toward the center of the Plateau, which I would expect to be uphill! The small image at bottom left is a Lunar Orbiter IV photo of the same region. Notice that the flow is not evident. Notice also that the big image shows bright stripes of crater rays from Aristarchus to the East - these also are not visible in the Orbiter view, in this case because it has too low a sun angle - the rays are apparent in Clementine images. The big image additionally shows many small bright spots not on Orbiter and not all visible on Clementine. This magical view that reveals features not visible on Orbiter or Clementine data is a radar image constructed using radiation with a wavelength of 13 cm. The radar beam penetrates a depth of about 10 times the wavelength, or a meter or so. Radar bright areas are commonly rough textures at the wavelength, and dark areas are smooth. The interpretation is that the dark material to the left of the Valley is ash deposits that are too thick for radar to fully penetrate. To the right of the rille the ash is apparently thinner, allowing the radar to pick out the rough surface of the lava flow. Some of the small bright spots are tiny impact crater thinlly covered by the ash. There appears to not be dark material within the Valley, allowing the deduction that lavas flowed through the the Valley after the last ash eruptions. The Clementine mosaic shows that Aristarchus ejecta is on the Valley floor so that crater (thought to be about 500 million years old) is younger than the last lava flows through the Valley.

Technical Details
Have you recognized exactly what part of Schröter's Valley the radar shows? It is at the end of the Valley where the younger inner sinuous rille breaks out and flows to the edge of the Plateau.

NEWS
I'll be at the Lunar & Planetary Science Conference from March 9 through March 15. As previously mentioned, rather than reprinting LPOD classics I invite LPOD readers to contribute daily LPODs for March 10 through March 16. See the LPOD Index page for details on how to submit your LPOD.

What lucky timing! I'm giving a PowerPoint slide presentation about the Moon this coming Monday at the monthly public meeting of our astronomy club. This will be my second talk about the Moon. I plan to discuss a list of interesting features to observe on the Moon--including Aristarchus, the Cobra Head, and Schroter's Valley. The information you discussed in today's LPOD came at just the right time.
During my talk, I also plan on mentioning the Moon Wiki and the "Images Needed" section. We have a number of members in our club who have large telescopes and imaging equipment. From what I've seen posted on our club website, they have been concentrating exclusively on images of deep-space objects. A lot of our members seem to consider the Moon a "nuisance." In my talk, I'll point out that the Moon offers literally thousands of challenging and interesting opportunities for photo work. Hopefully, it will spark some interest.

Good luck with your talk.

I think you'll find the vast majority of the "Images Needed" links point to pages for farside features. The missing nearside ones are mostly of features of somewhat vaguely defined extent, or ones that show up well only under very special lighting -- such as many rille and ridge system. This is not to say there are good Earth-based photos of all the remaining nearside features. Indeed, at present the majority of them are illustrated only by overhead images taken by Lunar Orbiter IV or Clementine. But you have to visit the individual pages and click the LPOD Photo Gallery link to see if anyone has bothered to upload an amateur photo of that feature.

Even from Earth, interested amateurs can help to illustrate the farside features by generating images with Map-a-Planet. This is actually very easy to do, and requires only a little time and patience. Complete directions for this, and many other tasks that would help to make the Wiki better, can be found by following the How to Help link in the navigation bar.