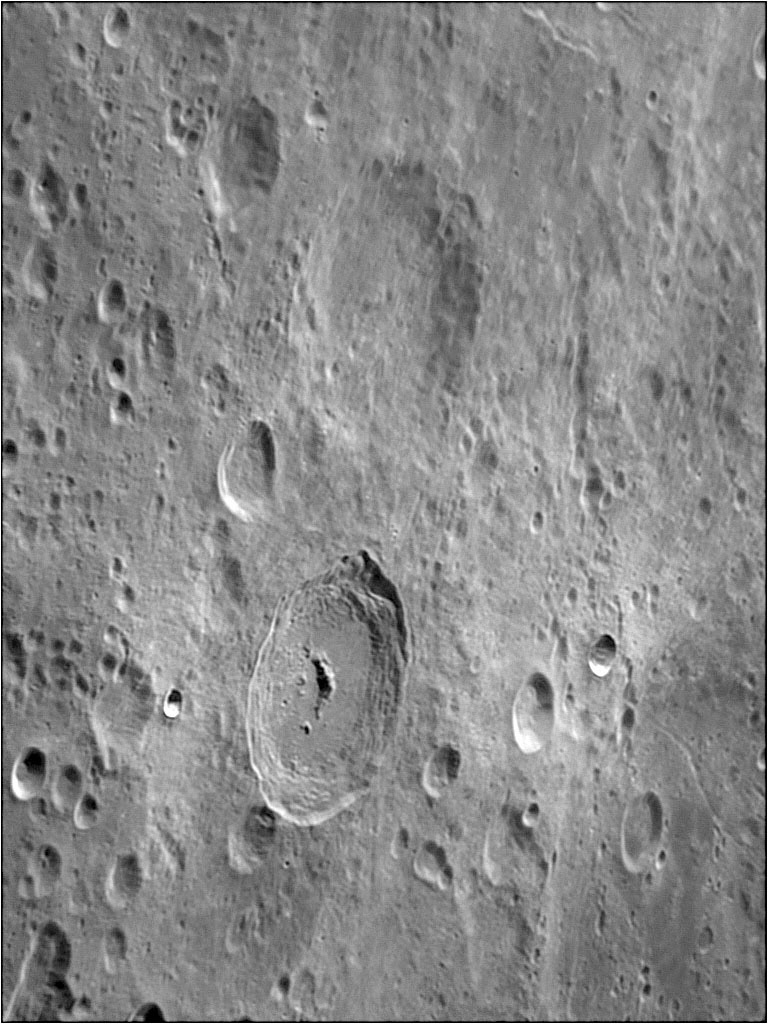 Just south of Petavius are two often overlooked craters, Snellius and Stevinus. The latter is the fresher crater with elongated central peak and a wallfull of terraces. Ejecta from Stevinus is drapped across the floor of the older and more subdued Snellius. This illumination is low enough to reveal the two extremely bright rays craters east and west of Stevinus. The bright little simple crater to the left is Stevinus A, and the second source of rays is the slightly larger feature to the right that used to be called Furnerius A. These two headlights are so bright that they are sometimes impossible to see at higher illumination. The southern edge of Petavius' rim is just visible at upper right surrounded by smooth material that could be impact melt except the crater is so old that melt would not be expected to survive. East of Snellius, and about the same length, is an ejecta crater chain from Petavius that looks like a knarled walking stick. A shorter one is just right at the image edge and another is at the north end of Furnerius, whose smooth floor is cut by a rille. Thanks Jérôme for providing an image for a nice little tour.

1. What is Furnerius A called now? Also I have noticed what appears to be rays from Stevinus region stretching way up Mare Fecunditatis (one measures according to the VMA 838 km). Andrew Martin SFO

2. This area (both Stevinus A and Furnerius A) is already noticeable with the unaided eye (a bright spot SE of Mare Nectaris).
P.S.: Thanks Chuck! (the nickname "Two Headlights").
Danny C.

3. Andrew -- I suspect Chuck is referring to the fact that Furnerius A is unlabelled in Antonin Rükl's Atlas of the Moon. Although the absence of a letter on Rükl's maps may make a crater feel orphaned, it is the IAU rather than Rükl who assigns lunar names, and the absence of a name on Rükl's maps does not indicate a once-named feature has become unnamed. Indeed, I know of only one crater (Euclides D) that has ever had an IAU-approved lettered designation that no longer has an official name. Furnerius A is certainly not one of these. According to Mary Blagg's Collated List, the name Furnerius A was assigned long ago by Beer and Mädler, and it was adopted by the IAU as part of its first official list of lunar names in 1935 (where it appears as Collated List #4576). Since 1973 the IAU has been in the process of replacing lettered crater names with individual names of deceased scientists, but Furnerius A is not one of those that have been replaced. - Jim Mosher