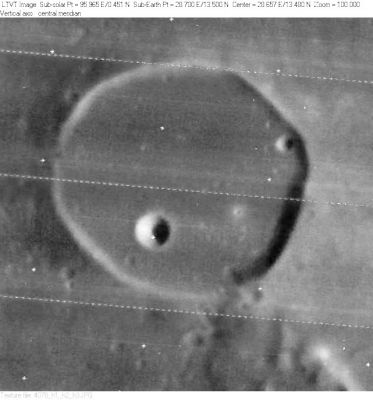 LO-IV-078H The 4-km diameter circular crater on the southwest floor of Jansen is Jansen Y.

(IAU Directions) JANSEN.--Owing to its comparatively low border, this is not a very conspicuous object. It is chiefly remarkable for the curious arrangement of the mountains and ridges on the S. and E. of it. There is a bright little crater on the S. side of the floor, and many noteworthy objects of the same class in the neighbourhood. The mountain arm running S., and ultimately bending W., forms a large incomplete hook-shaped formation terminating at a ring-plain, Jansen B. The ridges in the Mare Tranquillitatis between Jansen B. and the region W. of Maskelyne display under a low sun foldings and wrinklings of a very extraordinary kind.